We link together different computing systems and software applications physically or functionally to act as a coordinated whole. We integrate discrete systems utilizing a variety of techniques such as computer networking, enterprise application integration, business process management or manual programming. Which involves integrating existing often disparate systems and is also about adding value to the system, capabilities that are possible because of interactions between subsystems.

We mostly do horizontal integration in which a specialized subsystem is dedicated to communication between other subsystems. This allows cutting the number of connections / interfaces to only one per subsystem which will connect directly to the Enterprise Service. The Enterprise Service is capable of translating the interface into another interface. This allows cutting the costs of integration and provides extreme flexibility. It is possible to completely replace one subsystem with another subsystem which provides similar functionality but exports different interfaces, all this completely transparent for the rest of the subsystems. 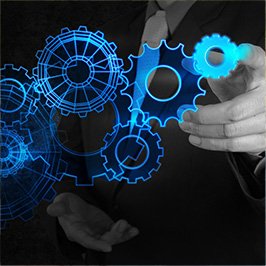 When build, clients are hassle free and average life of the solution remains at least 10 years except technology updates. The front end interfaces are so much customized that even a user with least knowledge of business domain can efficiently use the system.

Which technologies we use?